2022 is coming to an end, and for many of us, that is a good thing. Now the big question remains… do we celebrate New Year’s Eve in Tokyo?

Normally, this time of year is all about celebrating the end of a prosperous year with colleagues and friends at End of Year drinking parties (bōnenkai 忘年会) or at massive New Year’s Eve nightclub events. Similar to Halloween, Tokyo usually offers a wide selection of ways to celebrate the big countdown.

Here is our guide to celebrating New Year’s Eve in Tokyo 2022!

The coronavirus cases in Tokyo have taken a dip since mass vaccinations, but the Japanese government still strongly requests people take precautions. Most nightclubs will require guests to wear a mask, provide contact information, and take a temperature check.

Because of the end-of-year parties, it is nearly impossible to grab a taxi. Stick to the trains on New Year’s Eve. All nightclubs will require this for entry.

Typically Tokyo’s trains stop running at 1 am, but on New Year’s Eve, they will operate all night. The time schedules will vary between train lines, but for the most part, you can expect a train every 20 to 30 minutes.

A majority of the clubs will open at 9 pm, with lines growing almost immediately. Arrive early to avoid waiting in massive lines.

Because trains are operating all night, clubs will start to thin out around 3 am. If you would like to avoid the massive crowds but still want to party, try celebrating the countdown at a bar or the Shibuya streets, and then hit the club later.

From about 30 minutes before the countdown, the bars will be swamped… and the last thing anyone wants is to celebrate the Countdown into the New Year waiting in line.

In recent years, the Tokyo police have blocked off large areas of Shibuya to prevent mass crowds. It is unclear how police will handle crowds, if any, but it would be best to avoid doing the countdown at the Shibuya scramble.

Roppongi’s top EDM nightclub, Sel Octagon is ending the year with LUCAS & STEVE. The duo is known for rocking huge EDM main stages, and their big dance hits, this is a set you don’t want to miss. Alongside them, Tokyo legend VIVID, will open for the duo, so you can expect some big big sounds you can only here at this countdown party.

Tokyo’s newest nightclub located at the heart of fashion and luxury, RAISE is bringing a real nightlife to Ginza. This is their second Countdown party, and if you are looking to celebrate the end of 2022 with champagne and fashionable people, this will be the spot for you.

We recommend arriving early as the lines into RAISE will be lengthy.

Tokyo’s newest super nightclub and most popular nightclub is located directly in the heart of Shinjuku, just down the street from the infamous Robot Restaurant. The club is massive, contains three different dance floors, and features incredible production on the main floor.

WARP’s lines are expected to be massive, so we suggest arriving before 9pm to guarantee entry. PRO TIP: Fast Pass tickets are available.

The infamous 1OAK Tokyo is throwing an enormous Countdown party with Kid Cudi and A$AP Ferg. Hip hop lovers this is the event for you. Expect bottles of champagne to pop, local models, and a young hip-hop crowd celebrating the countdown.

The famous lounge and nightclub from Singapore has landed in Shibuya’s Tokyu Plaza. Taking over the 17th-floor deck, nightclub, and 18th-floor restaurant area, Ce La Vi Tokyo is promising to offer the most exclusive party in Shibuya with a 360-degree view of Tokyo!

WOMB is bringing in the new year with the deep house and techno sounds from the Tokyo underground! In additional they are flying in Craig Richards for an extra slice of deep grooves.

Guests looking for a night of deep sounds can groove the night away on three different dance floors or take advantage of WOMB’s new VIP tables overlooking the main dance floor.

Shibuya’s popular club is a safe bet for bringing in the new year. Camelot’s three different floors will cater to all party-goers with Hip Hop, Top 40, EDM, Trap, and much more!

This popular Roppongi nightclub is the place to be for international partygoers. Exepect hordes of english speaking party people dancing to popular top 40 tracks. The lines get long here, so be sure to arrive early.

Shibuya’s most conveniently located nightclub is celebrating the New Year’s Eve Countdown with a round up of Tokyo’s top DJs. The club features some pretty amazing production, with bottle girls dancing around the club. This countdown is all about the glittering lights and co2 blasts. Check this party out for an EDM fix mixed with popular dance hits.

As noted earlier, typically the Shibuya Crossing Countdown is a free way to celebrate the new year. This year police will be out in full force, blocking certain areas from being accessible.

However you decide to celebrate New Year’s Eve, we here at Tokyo Night Owl wish our readers a safe and Happy New Year! 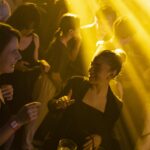